The Finance Ministry today came out with new three-page income tax return (ITR) forms, dropping the controversial provision for mandatory disclosure of foreign trips and dormant bank accounts, while it also extended the last date of filing to August 31. 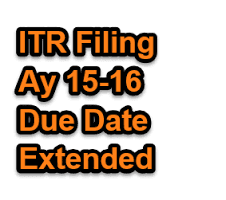 The new forms - ITR 2 and ITR 2A - will have only three pages and other details will have to be filled in schedules, said a Finance Ministry statement.

A new form ITR 2A has been brought out by the ministry which can be filed by an individual or HUF who does not have capital gains, income from business/ profession or foreign asset/foreign income

The statement also said that the last date for submission of tax returns will be extended to August 31, 2015.

Further, the Ministry has done away with disclosure of details of dormant accounts which are not operational during the last three years.

"As regards bank account details in all these forms, only the IFS code, account number of all the current/savings account which are held at any time during the previous year will be required to be filled-up. The balance in accounts will not be required to be furnished," the statement added.
The simplified I-T return forms are being brought after the earlier version was opposed by industry, MPs and assessees for its cumbersome disclosure norms.
The salaried individuals and those persons who do not have business/professional income are required to file I-T returns in either ITR-1 or ITR-2 by July 31 every year.

Further, an individual, who is not an Indian citizen and is in India on a business, employment or student visa (expatriate), would not mandatorily be required to report the foreign assets acquired by him during the previous years in which he was non-resident and if no income is derived from such assets during the relevant previous year, the statement said. At present individuals/HUFs having income from more than one house property and capital gains are required to file Form ITR-2. Observing that majority of individuals/HUFs who file Form ITR-2 do not have capital gains, the statement said, "with a view to provide for a simplified form for these individuals/HUFs, a new Form ITR 2A is proposed which can be filed by an individual or HUF who does not have capital gains, income from business/profession or foreign asset/foreign income."

Individuals having exempt income without any ceiling (other than agricultural income exceeding Rs 5,000) can now file Form ITR 1 (Sahaj). Similar simplification is also proposed for individuals/HUF in respect of Form ITR 4S (Sugam), it added. It further said that as software for filing these forms was under preparation, the last date for submission of tax returns will be extended to August 31, 2015. "As the software for these forms is under preparation, they are likely to be available for e-filing by third week of June. Accordingly, the time limit for filing these returns is also proposed to be extended up to August 31, 2015. A separate notification will be issued in this regard," the release said. Following the controversy over the ITR forms for Assessment Year 2015-16, which sought details of bank accounts and foreign visits, the revenue department had put them on hold. The ITR forms, which was notified last month by the CBDT for the current assessment year, had specific columns for banks accounts, IFSC Code, names of joint account holders and foreign visits, including the ones paid by companies.