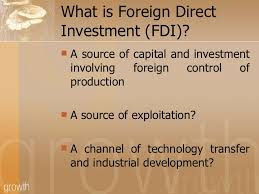 After hearing enough rambling on FDI’s and its urgent need to stop Indian rupee fall, one is very curious to know about FDI and trying to understand what qualifies as FDI and what routes are available for them to invest in our country.

In India, foreign investments can be made through any of the following methods:

1.       Incorporate a wholly owned subsidiary (WOS) or a company
2.      Result of merger or an acquisition of an unrelated enterprise
3.      Acquire shares in an associated enterprise
4.      Participate in an equity joint venture with another investor or enterprise

Who can invest in India?

1.       A Non-resident entity means a person resident outside India
2.      Non Resident Indian or Person of Indian Origin (PIO holder) or Overseas Citizen of India (OCI holder)
3.      A body corporate means a company incorporated outside India
4.      Foreign Institutional Investor (FII) means an entity established or incorporated outside India which proposes to make investment in India and which is registered as a FII in accordance with the Securities and Exchange Board of India (SEBI) (Foreign Institutional Investor) Regulations 1995.
5.      Foreign Venture Capital Investor (FVCI) means an investor incorporated and established outside India, which is registered under the Securities and Exchange Board of India (Foreign Venture Capital Investor) Regulations, 2000 {SEBI(FVCI) Regulations} and proposes to make investment in accordance with these Regulations

There are two important routes specified by Government of India through which an investor can apply for FDI. These are “Automatic route” and “Government approval route”.

“Automatic route” means Non Resident entities can invest in the capital of resident entities without the prior approval of Government i.e. Foreign Investment Promotion Board (FIPB), Department of Economic Affairs (DEA), Ministry of Finance or Department of Industrial Policy & Promotion, as the case may be.  Some of the major sectors in which Automatic route is permitted: Agriculture, mining, petroleum and natural gas, manufacturing, information services, trading, e-commerce activities. The investment percentage under Automatic route is permitted depending upon the nature of business.

“Government approval route” means that investment in the capital of resident entities by non-resident entities can be made only with the prior approval of Government i.e. Foreign Investment Promotion Board (FIPB), Department of Economic Affairs (DEA), Ministry of Finance or Department of Industrial Policy & Promotion, as the case may be. The sectors which are not covered under automatic route shall require approval of Government before any investment.